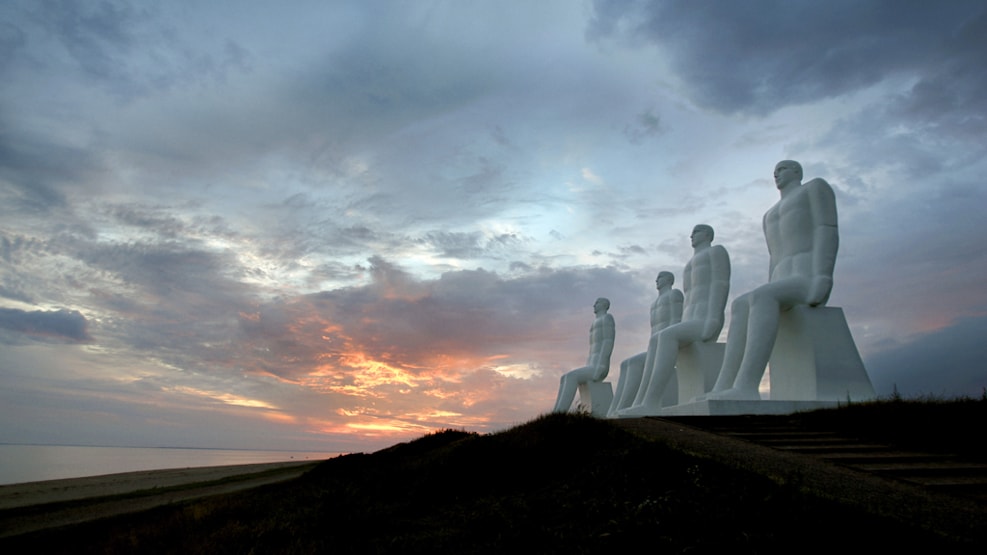 Visitors arriving in Esbjerg from the sea are greeted by Svend Wiig Hansen’s monumental sculpture "Man meets the Sea", which was raised on the occasion of Esbjerg celebrating its 100th anniversary as an independent municipality in 1994. It was officially unveiled on 28 October 1995.

The sculpture, made of white concrete, portrays the meeting between pure, unspoilt mankind and nature. Man, innocent as from his mother’s womb. Man before rising up and beginning to act. That, according to Wiig Hansen, was where things started to go wrong - when man got"dirt" on his hands. Wiig Hansen has portrayed this encounter by creating a universal sculpture that has the mood of a temple, of an acropolis - a sculpture with a sacred aura to it. This sacred aura is attained by the rigid appearance of the human figures, something which reminds the onlooker of the Memnon columns or Ramses II gazing out over the Nile Valley at Abu Simbel. It is also impossible for the onlooker not to be reminded of the mysterious stone figures on the Easter Islands.

The legs are like the columns of a Greek temple. The lower legs have been made so long precisely so as to achieve this columnlike effect. The upper legs are short in proportion. The identical heads, which with their inscrutable and unfathomable expressions gaze out towards Skallingen and the entrance to the harbour, also contribute greatly to the glimpse you get of the supernatural - a hint of the divine.
The sculpture is not tied down to any one age. Its expressiveness, laden with atmosphere and emotion, makes it eternally valid.

That the number of figures sitting on the shore is precisely four is because Wiig Hansen found the number harmonious - more in accordance with the basic sculptural concept of "pure" mankind than, for example, three or five. Because of its size (it is nine metres tall) and charisma, the sculpture has become a landmark for Esbjerg. In clear weather the bodies, sitting there like unfurled sails, can be seen 10 kilometres away. Esbjerg has been enriched by a monumental sculpture of international stature.

The sculpture is located on the sea shore 4 km from Esbjerg.