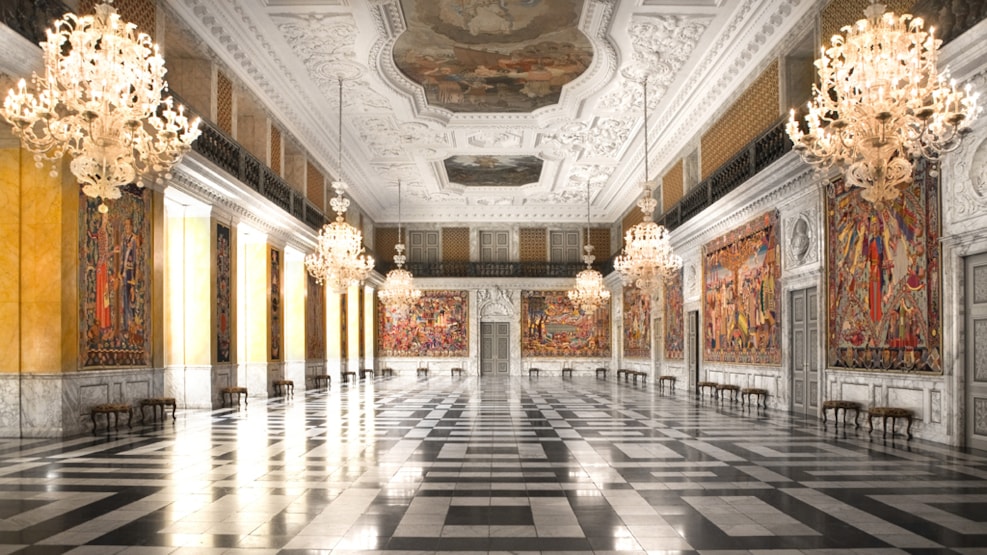 Experience 800 years of royal history at the awe-inspiring Christiansborg Palace.

Once home to kings and queens, Christiansborg Palace now houses the Danish Parliament, the Supreme Court, and the Ministry of State. You can visit the state rooms and walk in the footsteps of royalty.

Walk though gilded rooms and decorated salons, some of which are still used by the Royal Family for various functions and events. The Royal Reception Rooms include The Tower Room and The Oval Throne Room where foreign ambassadors to Denmark are received by the Queen. The lavish Throne Room gives access to the balcony where the Danish monarchs are proclaimed, with twin thrones to admire.

The Great Hall is the most imposing room in the palace. This is where you will find the Queen's tapestries.

The Danish business community marked the occasion of Her Majesty Queen Margrethe II's 50th birthday in 1990 by ordering a gift of 11 tapestries. Bjørn Nørgaard painted the full-size sketches upon which the tapestries were woven. The tapestry series depicts 1000 years of Danish history.

The Prime Minister of Denmark also uses The Royal Reception Rooms in connection with state visits by foreign state leaders. The Alexandra Hall is used for official dinners.

If you hold a ticket to the Royal Reception Rooms, you are entitled to a free guided tour of the premises. Other experiences at Christiansborg Palace include a spooky tour of the ruins discovered underneath the palace, which include a wall dating to the Middle Ages, and a trip round the castle's former kitchens, complete with sounds and models.